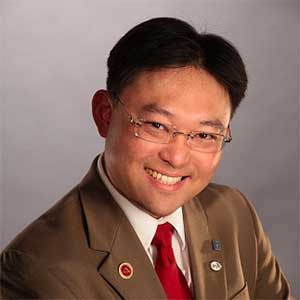 Takita, is fluent in Japanese/English. was born and raised in Osaka, Japan After receiving his high school diplomat in his home town, he came to the United States at the age of 18.  He continued his college study in New York City and received his Associate Degree in Small Business and Entrepreneurship at City University of New York.  In 2002, he had received Real Estate License in the State of New York.

He was first appointed to serve LIBOR BOD in 2010, also became NYSAR Director since 2012.

New York city is diverse. His focus is not only local real estate but global real estate business.  He understands the practice in both the US Real Estate and Japanese Real Estate Transactions. Hence, involved with AREAA Global/Japan Connect and as the organizer of Japan Trade Mission in 2013, and FIABCI (Federation of International Real Estate) Trade Mission to Japan in 2016.  He bridges between US and Japan Real Estate in consulting and referring network.    He visited various Japanese real estate corporates and associations.

In 2015, he attended NAR/IREC in Manila, and NAR India Convention to bring close and bridge between Asian Countries, and North America.

In 2016, He participated MIPIM Japan,

in 2017, he participated  NAR/IREC Bangkok Thailand. and PAREB Conference as speaker in Philippines,

In 2018, he participated NAR/IREC Vietnam and ASEAN Real Estate Conference in Cambodia.

He has been serving NAR CIPS Advisory Board and NAR Global Business and alliance committee for several years. and Global business Advisory Board as 2017-2018 NAR President Liaison to Mongolia.

He was 2014 chair of Fair Housing and Culture Diversity at (NYSAR,) New York State Association of REALTORS®. Plus, served various committees.

And in 2019, he serves LIBOR chair of Global Business Committee. And organized Study mission to Spain, to attend SIRA Conference in Barcelona.

During the Couse of years, he has earned NAR Designations, ABR, CBR, SRES, SFR, epro, RSPS, HAFA, GRI, and CIPS.

Recently, Relocation Company from Japan approached him, to help support Japanese corporates employee /EXPAT relocation in the US. And consulting investor in to U.S. real estate market.

2018, He was awarded FIABCI (Federation of International Real Estate) World President Medal of honor in FIABCI World Congress in Dubai. There are only 310 people hold this medal around the world.

He also participate RPAC , and NYSAR LOBBY DAY and Hill Visit every year. Always attend NYSAR Business meeting and NAR Conference to keep up to date

The accuracy of all information, regardless of source, including but not limited to area sizes and lot sizes, is deemed reliable but not guaranteed and should be personally verified through personal inspection by and/or with the appropriate professionals.

CONNECTING MEMBERS TO THE WORLD